Each year, the Learning Technologies conference showcases the leading organisational learning and technologies used to support learning in the workplace.

Gamification: The Next Level

Gamification was the conference’s hot topic in 2016. The concept has been around for years and is still a buzzword in the area of workplace training.

Most companies have switched on to the idea of using the incentivising elements of computer games and applying them to employee learning. The well-documented benefits include the nature of rewards, levels and badges engaging employees far beyond the level of traditional learning methods.

It’s no surprise then that the 2017 conference develops this theme with talks such as ‘How games inspire, enthral and engage us’ by Pete Jenkins (Founder of Gamification+ Ltd) and how gamification and social learning enhance ‘stickiness’ in ‘scenario-based learning’ by Ken Thompson.

Gamification is here to stay. 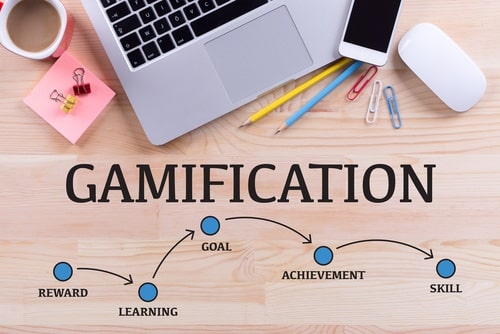 The Reality of Virtual Reality

But what is VR?

The term ‘virtual reality’ was coined by Jaron Lanier in 1987 to describe a world where users find it difficult to differentiate from what is real and what is not.

This definition highlights one of the most important qualities of virtual reality for the learner – total immersion. Steve Wheeler views total learning immersion as one of the ‘considerable threats to our current ways of working’ in his talk on ‘emerging technologies’.

However until recently, many companies have tried and failed to make a success of VR. The 1990s launch of the Nintendo Virtual Boy is a high profile example of a product which flopped and died only a year after launch.

Talk of VR finally turned into action when Facebook spent £1.3bn buying the company Oculus in 2014.

Gaming has provided the main push behind the current crop of VR devices, however when Mark Zuckerberg announced the deal, he signalled an extension to the application of virtual reality.

“After games, we’re going to make Oculus a platform for many other experiences … studying in a classroom of students and teachers all over the world … just by putting on goggles in your home.”

Research has shown that most people learn kinaesthetically (learning by doing) and VR seems to provide the ideal platform to cater for this intuitive form of learning.

From a slow start in 2015, what followed was a boom in the launch of VR devices at varying cost.

VR is also here to stay.

Not everyone believes that VR will be an immersive learning ‘nirvana’ for everyone. Helen Dudfield (QinetiQ Senior Fellow in human science) presents on ‘Virtual reality and augmented reality in use – the hype, the experience and the evidence’ where she details evidence, testing and the limitation of virtual reality.

Despite numerous device and pricing options (i.e. ranging from Google Cardboard headset at £15 and Oculus Rift at around £500), there will be serious cost implications for any large organisation. If they purchase a limited number of devices then this effectively limits the anytime, anywhere learning experience enjoyed through mobile and tablet use.

Also, can organisations afford to migrate all their learning materials into a VR experience?

While the immersive and ‘learning by doing’ benefits are obvious, it may be some time before VR is the complete elearning solution for many organisations.

The notion of the classroom is being redefined yet again. 2017 promises to be an exciting showcase of the future of elearning.

Chat about the future of elearning with Webanywhere. We will be exhibiting at stand N6 at Learning Technologies 2017 so feel free to drop by!